OFFICIAL OPENING OF THE CAUSE OF

Mother Marie Gertrude a Zealous missionary lived what she preached :“Zeal and passion for God and souls throw the missionary into God`s hands and God throws him/her to sacrifice, immolation, torture, work or death according to Divine Wisdom…A missionary and a martyr are the same except in the form and formula of execution. This apostolic life is guided by a Divine Wind the Holy Spirit.” (MMG : The Solid Virtues p. 2). Having thrown herself into the hands of God in total abandonment and passion for God and zeal for souls she became a martyr of God’s love.

As we know on 29 November 2017 having completed the Diocesan Phase of the beatification and canonization process of Mother Marie Gertrude all the documents had been sent to Rome. On 8 October 2018 was yet another milestone of the process of sainthood of Mother Marie Gertrude. On that day at 9.30 am the Cause of Mother Marie Gertrude was officially opened in a short ceremony in Vatican, Rome. Sr. Therese Leena, Sr. Roseline Felicie, Sr. Sheeba had come from France to witness this great event. Srs. Lissy George, Cicily, Nihita and Kaini Rose joined from Rome community. 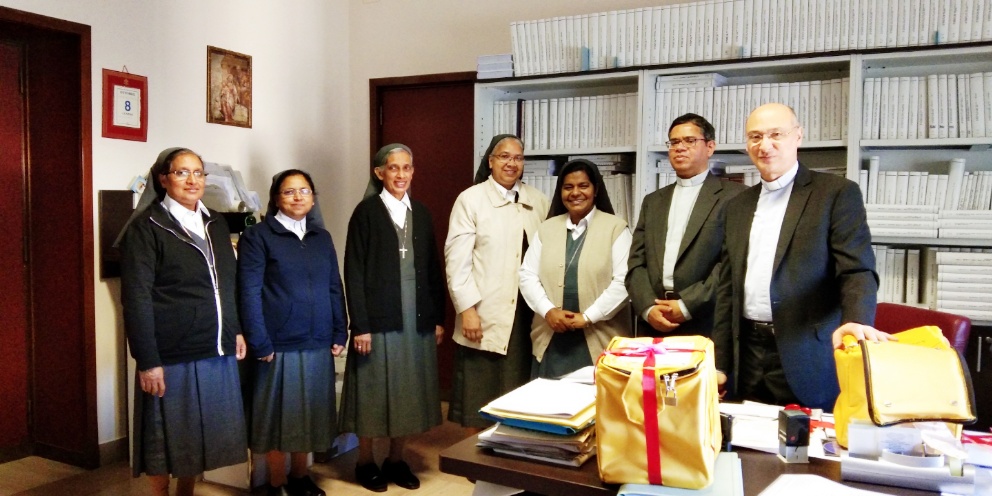 In a symbolic way one of the suitcases which contain the documents of MMG was placed before us. The ceremony began with a short prayer. Mons. Papalardo (The Secretary for the opening of the cause) along with Mons. Paul Pallath (One of the Relators of the Cause) before us officially opened the suitcase and took out the packages which contains the writings of Mother Marie Gertrude and thus the Cause is officially opened in Rome.

All of us could experience the overwhelming presence of our dear Mother Marie Gertrude and the presence of all the SMMIs all over the world and in a special way all those who have worked for it especially our late beloved Archbishop Abraham Viruthakulanagara, all our pioneers who have gone to eternal rest.

We take this opportunity to express our gratitude and love to all of you who spend time in praying and thanking the Lord especially on this great day. Please continue to pray that we may constantly throw ourselves into the hands of God in passion for God and zeal for souls and God may in turn throw us into sacrifices, immolation, trials and difficulties in fulfilling His mission. Mother Marie Gertrude intercede for us.